The east of southern England – the county of Kent in particular – is referred to as the “garden of England”. Already on the approach to London you will want to confirm this immediately on a beautiful day from above. Once you are on the road, in many areas you actually feel like you are in a huge garden. And then there are the real “gardens” – these magnificent facilities where you can spend hours and be impressed by ever-changing views. Especially the typical landscape disseries, quasi-designed landscapes, also inspire non-garden lovers. But even without gardens, the east of southern England, with its counties of Kent, East Sussex and West Sussex, is incredibly beautiful and worth visiting.

The starting point is London’s Gatwick Airport, which is served by Easyjet from many countries. This means you’re immediately in the area where you want to be – without any motorway stress on the M25 around London. 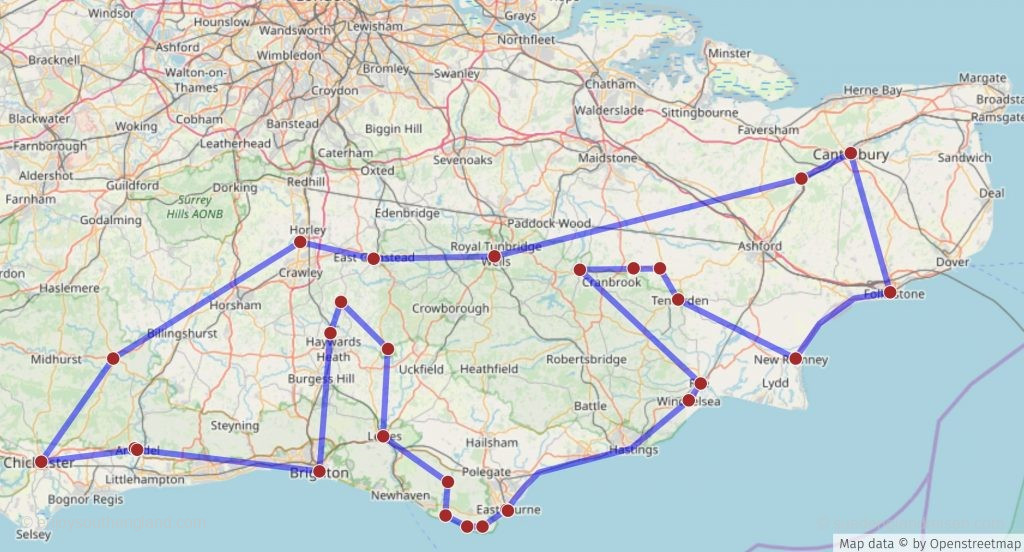 We suggest to go first to Petworth, located in South Downs National Park. This is a wonderful starting point and with Petworth House and Park, but especially the huge Petworth Park (admission free, but observe opening hours) you have a great start.

Via Chichester with its beautiful old town we continue to Arundel. The village is situated on the hillside and is dominated by its castle, which includes a very beautiful garden. A walk along the River Arun completes the visit.

It changes to more urban livestyle in the seaside resort of Brighton, which is still more or less well remembered by countless students of language travel. The somewhat sloping Royal Pavilion is worth seeing, as is the seafront promenade with its magnificent old hotels and the pier.

Let’s take a short detour inland and visit Wakehurst Place (a mansion an wonderful garden) at Heyward’s Heath and Borde Hill Garden with its incredible Bluebell fields in the spring near Lindfield. Not far away is Sheffield Park, a particularly worth seeing landscape diner – especially in spring, when the rhododendrons protrude as huge trees into the park’s lakes!

Back towards the coast we are definitely still looking past Lewes. The ruins of the castle are worth seeing, but without question also the “Harvey’s Brewery“, a beautiful old brewery in the middle of the village with its own restaurant for tasting the good beers. But also the 15. century bookstore with its open displays wants to be visited. Through the foothills of the South Downs we continue to the Cuckmere Valley. First you pass the white horse – a huge chalk drawing in the hills – and then a detour into the picturesque Alfriston.
And then you have to be careful: On the way to the coast you drive through Litlington, where there is a magnificent Litlington Tea Garden very hidden. Be sure to go for the afternoon tea and a refreshment!

Now we come to a highlight of our journey: the Seven Sisters, fantastic white chalk cliffs, which represent an incredible contrast to the blue sea. It is worth a hike from the parking lot directly there – both below and up on the rocks. But beware: there is no backup above!
A little further in the direction of Eastbourne we find Birling Gap, which offers a great view and a comfortable descent from the cliffs down to the beach and as a small highlight the view from Beachy Head. From there, the fashionable seaside resort of Eastbourne is already visible. After Hastings we move to the nearby Battle, which was place of the battle so important to English history in 1066 and further on to Rye. This beautiful medieval town with its cobbled streets is absolutely quiet and worth visiting, especially in the evening after the crowds of tourists have left! The Town as a starting point for a few days is worthwhile.

Rye itself is already on the edge of the Weald, a landscape of special beauty. In the middle of the Weald is Tenterden to be found. A nice small town from which the steam trains of the “Kent & East Sussex Railway” start to their journey to the remarkable ruins of Bodiam Castle. In any case, the whole Weald is very worth exploring and has many nice little villages, such as Goudhurst or others.

And here is Sissinghurst, the famous garden of the author Vita Sackville-West. But be careful: at certain times the garden is very crowded by the tourists!
By the way: Would anyone have thought that white wine is grown in England? And on the other part to a very low-acid and not even bad wine is vinified? If you don’t believe it, the Biddenden Vineyards are recommended for your own tasting.

We drive back to the coast – at least almost. Because in the middle of the marshland is New Romney, the hub of the “Romney, Hythe & Dymchurch Railway“. This is a 1:3 scale steam train that connects the cities of the march with the beach as public transport.
From here it is not far to Folkstone and Dover, where the ferries to France depart. We’ve seen the white chalk cliffs at the Seven Sisters – and believe us: they’re much more impressive and beautiful than these in Dover!

A highlight of the trip is certainly the ancient archbishop’s town of Canterbury with its truly impressive and inside more than inviting cathedral. Now we move west again and only about 10 km away from Canterbury is the village of Chilham. Tiny, but with small cottages, half-timbered houses and a small village square so typical of the area!
A little further we reach the north of the Weald and visit Royal Tunbridge Wells, a small town with the spa promenade lined with arcades and trees and the beautiful old grain exchange (today, among other things, a café). Groombridge Park is again a very popular garden and via the inviting East Grinstead we come back to Crawley to Gatwick Airport.

For this trip you should calculate at least 12 days.

And here some places on this is the tour: