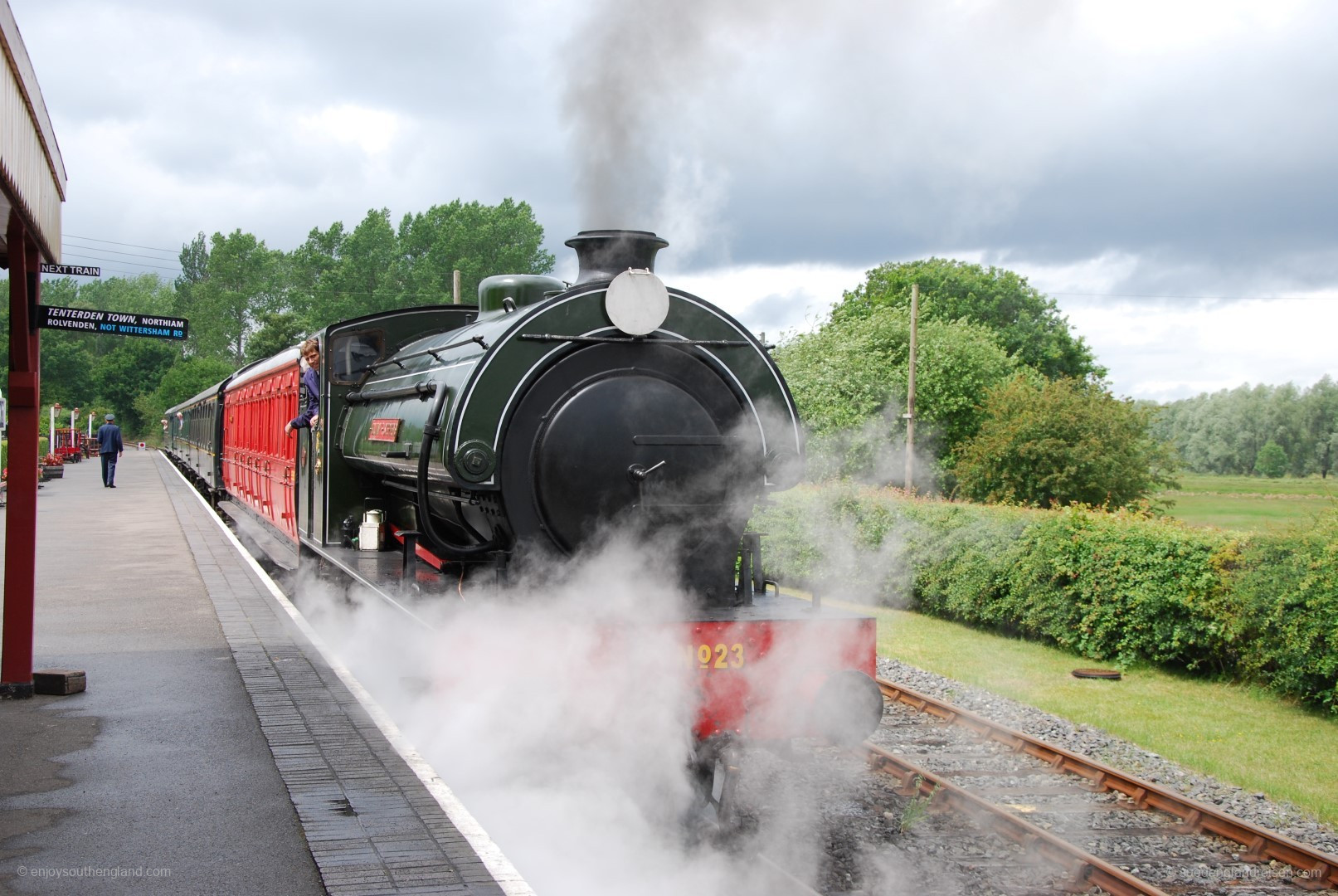 Kent & East Sussex Railway – Exit of the train from Bodiam

The “Wealds” are a hill range in the south-east of England, on the map just to the right of London. The region in the counties of Kent and East Sussex is a strong commuter and catchment area to the British capital, but does not have the industrial character of other parts of south-east England. On the contrary, the gently curved hillcountry is rather touristic and enchants the visitor with its beautiful historical small towns, narrow streets and always surprising views into a lovely, always green landscape. Plans for a railway through this region were drawn up as early as 1850. However, a number of problems delayed their construction until the opening of the Rother Valley Railway on 2 April 1900. This largely followed the course of the narrow river Rother and connected the main line London-Dover with the Line London-Brighton between the stations Robertsbridge and Headcorn. However, the line never developed any greater importance. Passenger services had to be stopped as early as 1954, and freight traffic followed in 1961. 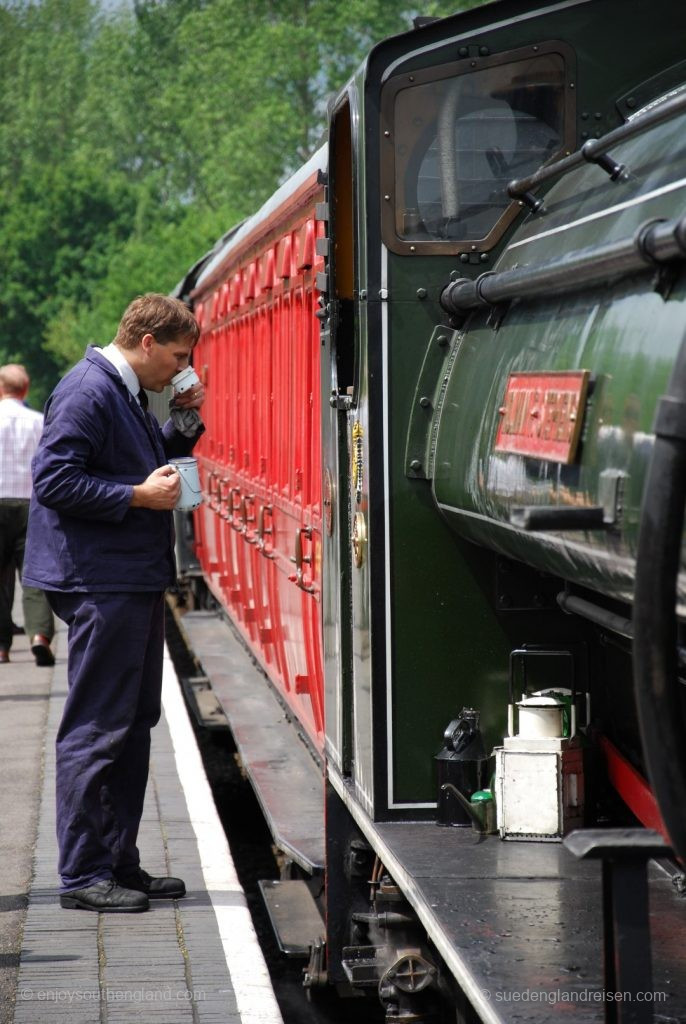 But back to the Kent & East Sussex Railway. This is fortunate that due to the low traffic significance of the line in its active time, fundamental renovation work has largely been omitted – and so large parts of the line are in the state of its opening more than a hundred years ago! With great attention to detail, the mainly volunteers restored the line with all the details such as railway gates (instead of barrier systems), signal boxes and railway stations as well as the locomotives and wagons. 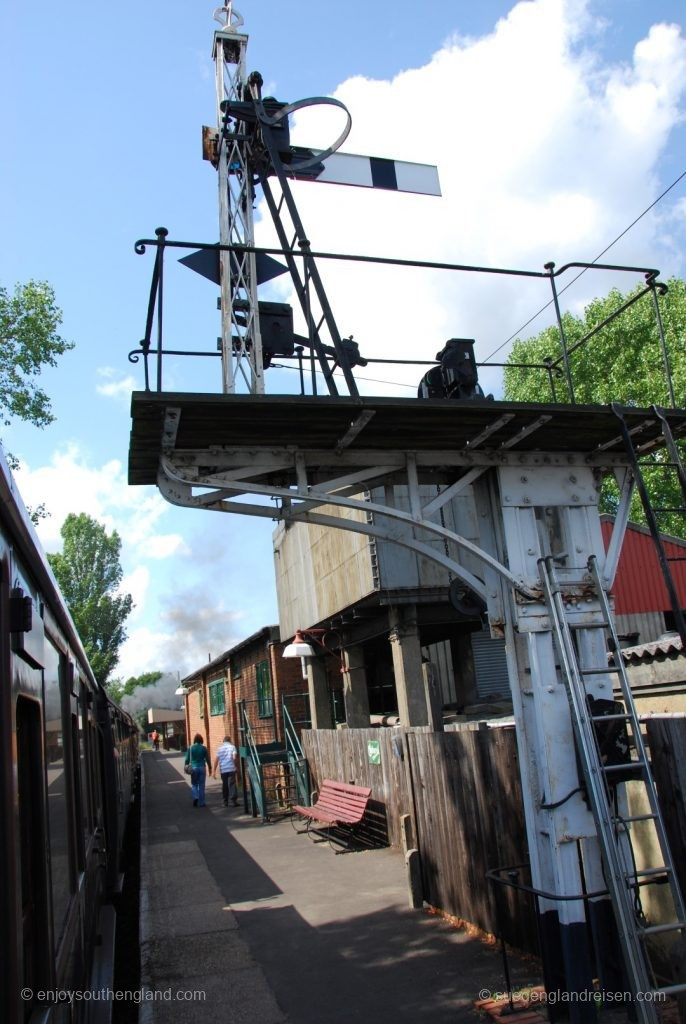 But now enough of the preface: Let’s go together on the 10:45 a.m. steam train from Tenterden to Bodiam. Today there are a total of five pairs of trains, two of which are driven by a diesel double railcar from 1958 and three pairs of trains with the classic steamer.

The station of Tenterden is worth a visit even without a ride. Typically British, the visitor receives a lush flower splendour. In addition to the house platform, historic Pullmann wagons, including several dining cars, are parked on two other tracks. These are brought on the track if necessary, especially with the dining car, first-class dinner rides take place regularly. It should be noted that British food – at least southern English – has made an incredible leap in quality in recent years and today does not even have to hide from high-quality continental European cuisine! 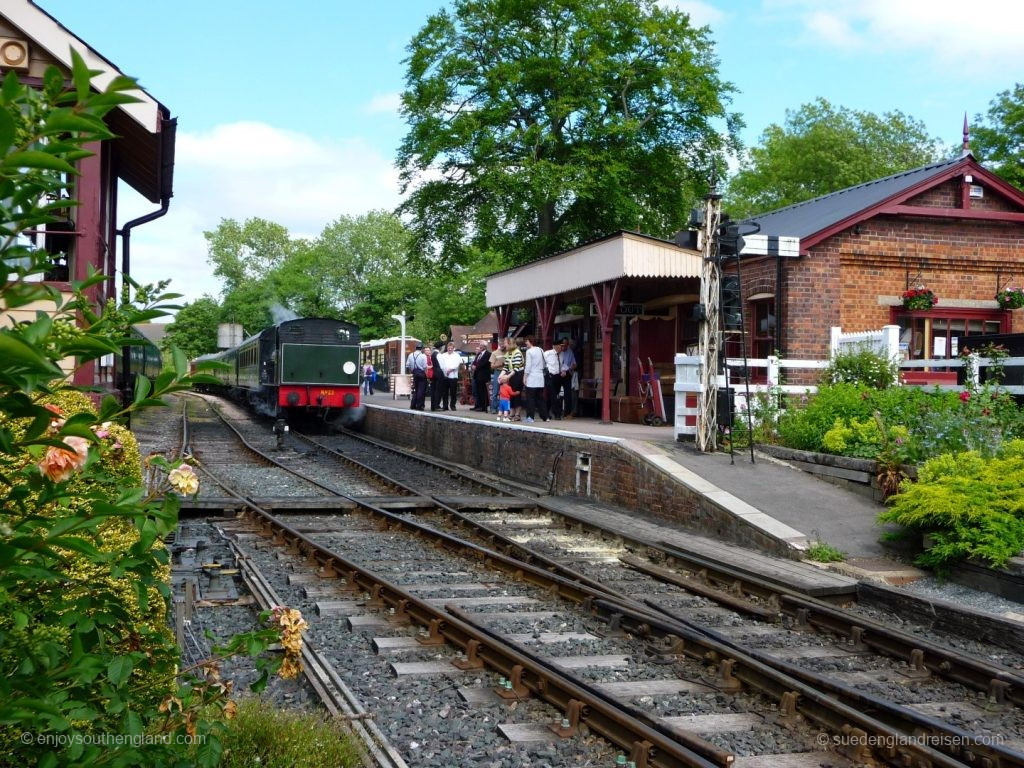 At the platform, the provided train is already waiting with five four-axle passenger cars from the 1930s and 1950s, three of which are reserved for tour groups. Locomotive No. 23, a C-coupler from 1952, now serves as a driving horse. In contrast to the customs of other countries, the carriages are still blocked – only a few minutes before departure the doors are opened. The third class, which dominates the car, also has lavishly upholstered armchairs and more than sufficient foot space. The passenger should not be too extensive: four seats per bench is offered by a compartment – in the first class, on the other hand, there are only two seats next to each other. If you prefer this, you can experience a first-class driving experience against the small surcharge of only one pound per trip (payable directly at the conductor). 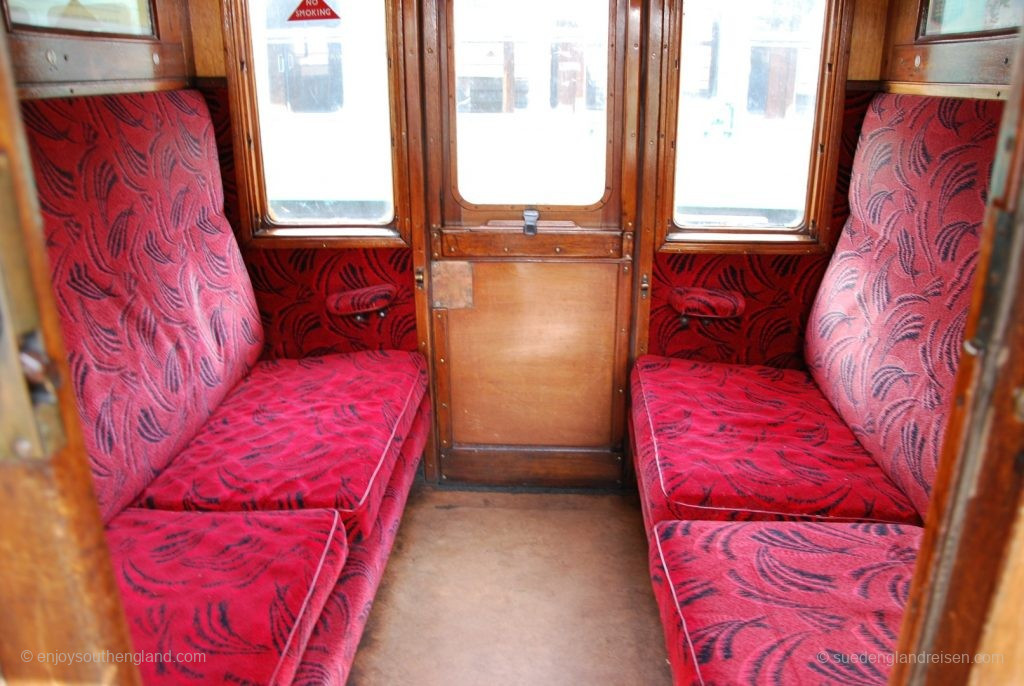 The timetable here at the “K&ESR” is not taken so tightly – one likes to wait for some delayed passengers, which the station manager personally leads to a free compartment. But then things get serious: the level crossing, which is directly at the station exit, is closed. However, there is no barrier system for this, but two large gates are moved. These block the railway (!) in its basic state and only after manual activity of both gate wings do they close the road. A large sign on the gate warns motorists, supported at night by a small lantern mounted on the gate wing. 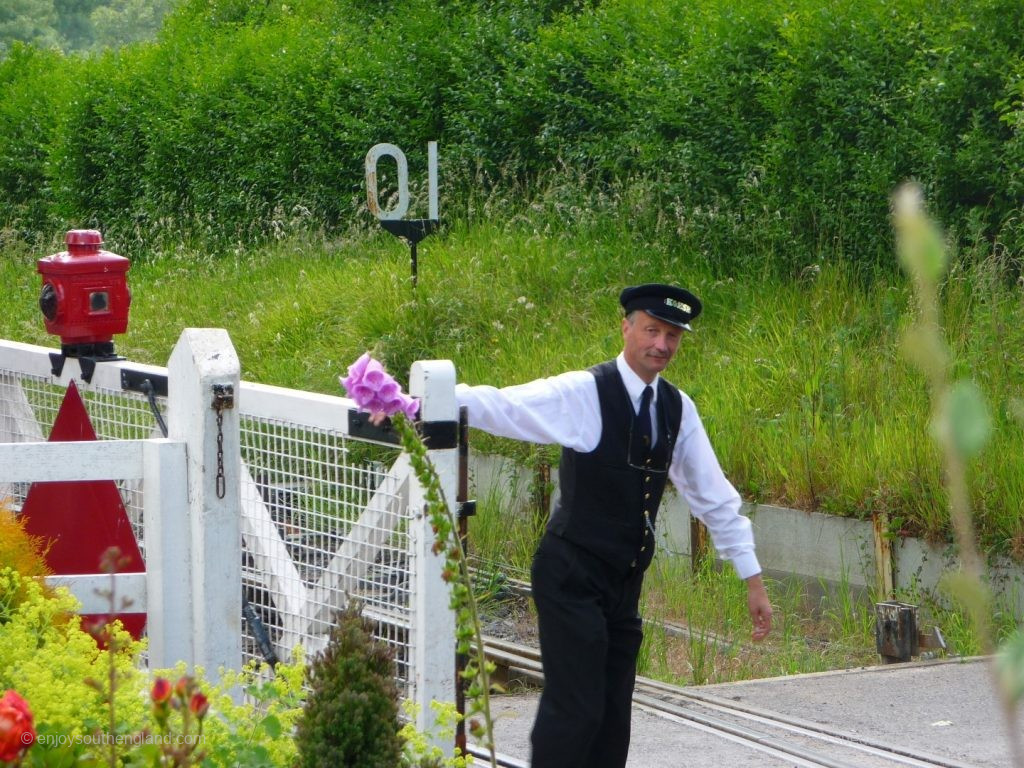 Kent & East Sussex Railway – the barriers will be closed

The line is thus free for our train, the traffic at the signal box, which is also directly at the level crossing, increases – and with that the departure order is already issued and the 50-minute journey begins. Slowly, the train picks up speed and disappears from the eyes of the remaining visitors in a slightly rising curve in the forest. 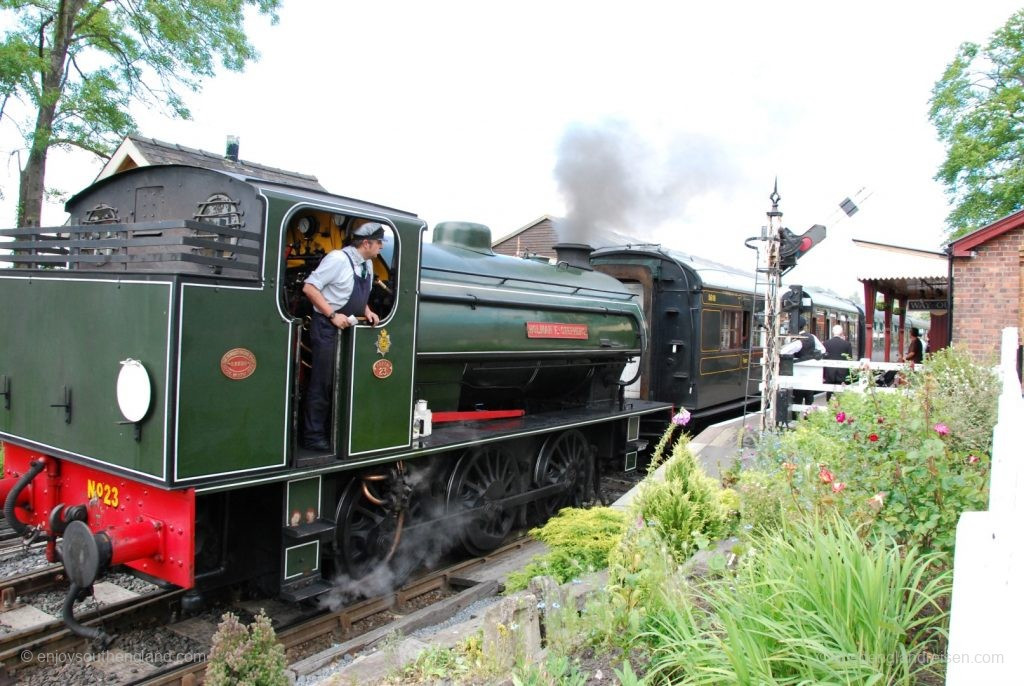 The Kent & East Sussex Railway at the exit from Tenterden 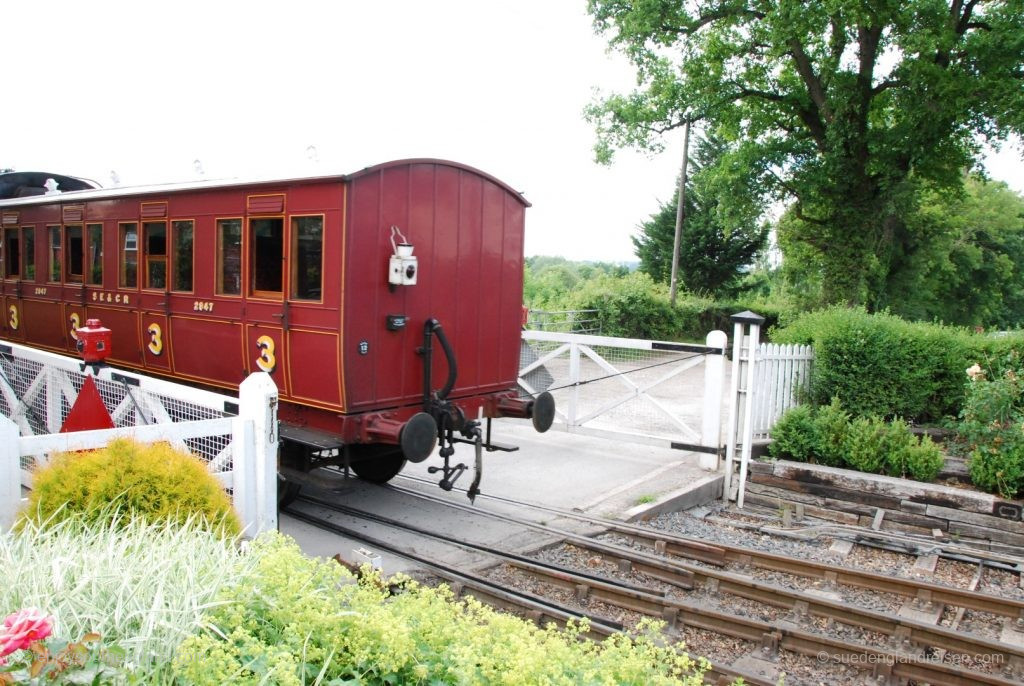 On screwed-up tracks, it goes with appropriate noise past frightened herds of cattle and sheep until the station Rolvenden is reached after the crossing of two railway crossings. Here the locomotive workshop is housed with a small viewing platform on the workshop for interested visitors. Continue past the hop darren typical of this area and a bit along the narrow watercourse “Newmill Channel” to Wittersham Road – here our train will have to cope with a decent incline on the return journey and have to work hard. But downhill it is getting easier and easier and today Wittersham Road will pass through without a stop – the eponymous road is even equipped with its own barrier keeper’s cottage. 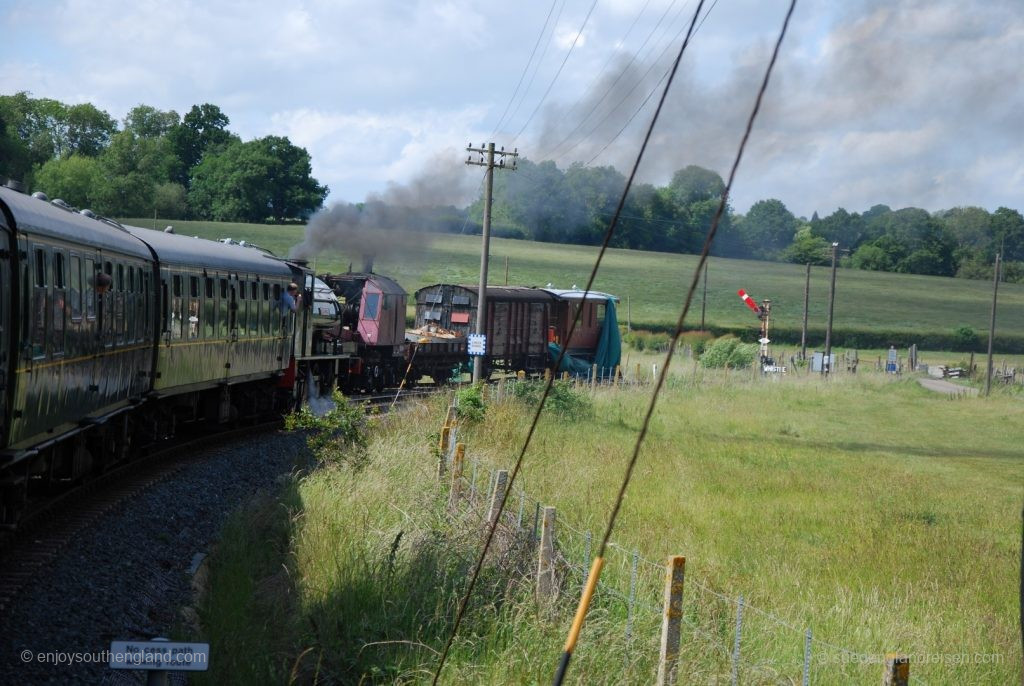 On one of the few structures we cross the still very narrow river Rother and approach Northiam. But before entering the station, the train has to stop – because now the train driver descends, goes ahead, opens or closes the railway gate of the road and only then lets the train continue. In Northiam is a stay of about eight minutes, as the locomotive has to take water. Time enough for a glimpse across the platform with the picturesquely draped stacks of old suitcases and nostalgic british army recruitment posters. From here, the last part of our tour in the valley along the slope leads quite straight to the end point Bodiam. The castle ruins of the same name come into view very early on, the photographer offers beautiful motifs in the direction of travel on the right. This brings bodiam to the point, where a large number of passengers are already waiting for the journey towards Tenterden. 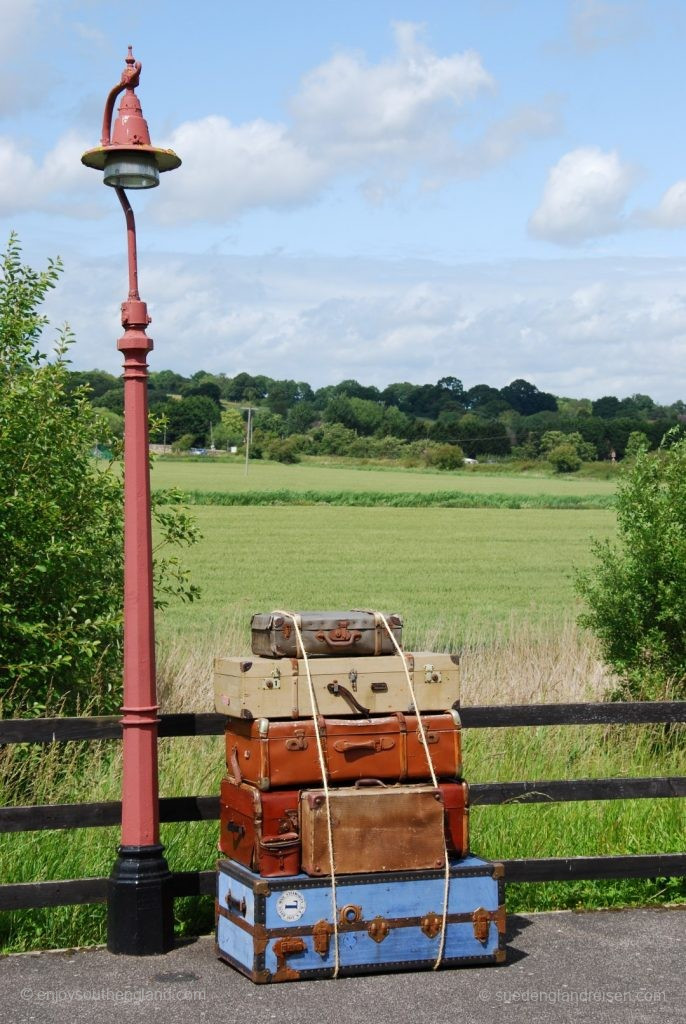 The disembarking passengers now have a nice opportunity to watch the locomotive moving with two openings and closings of the railway gates. Afterwards it is worth a visit to the “Bodiam Castle” with its nice “Tea Garden” and then the return trip with the next train, of course again guided by our steam locomotive No. 23. 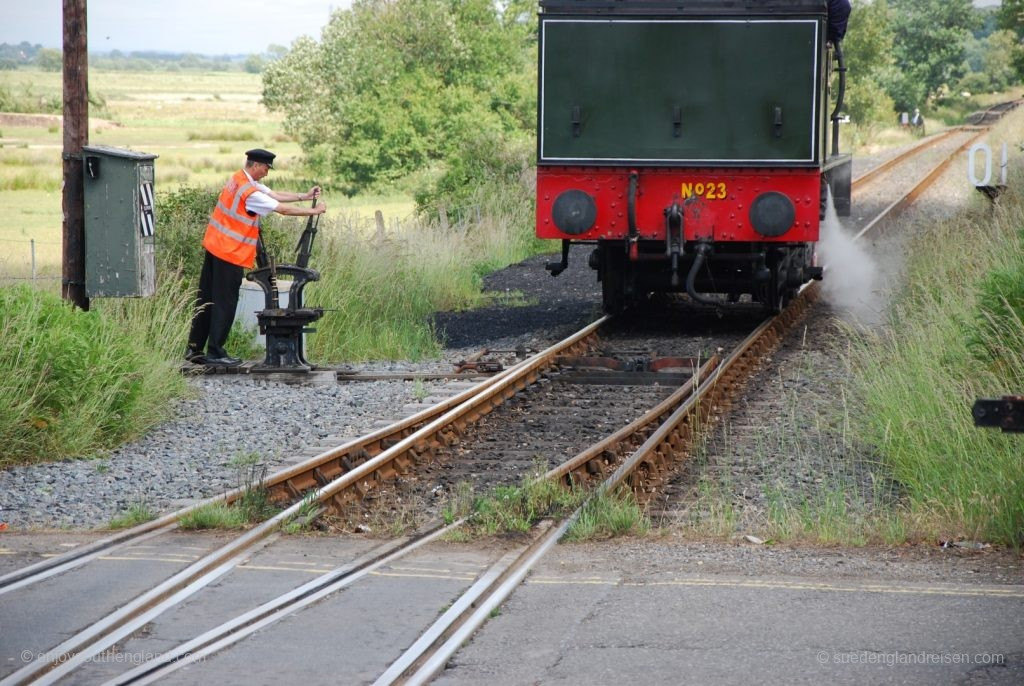 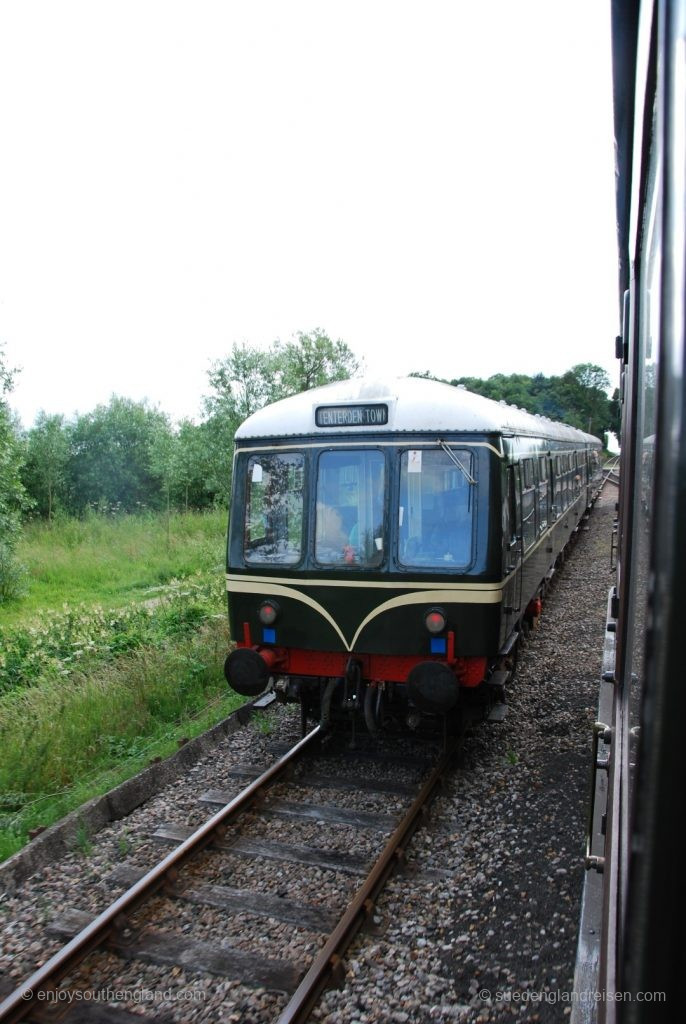 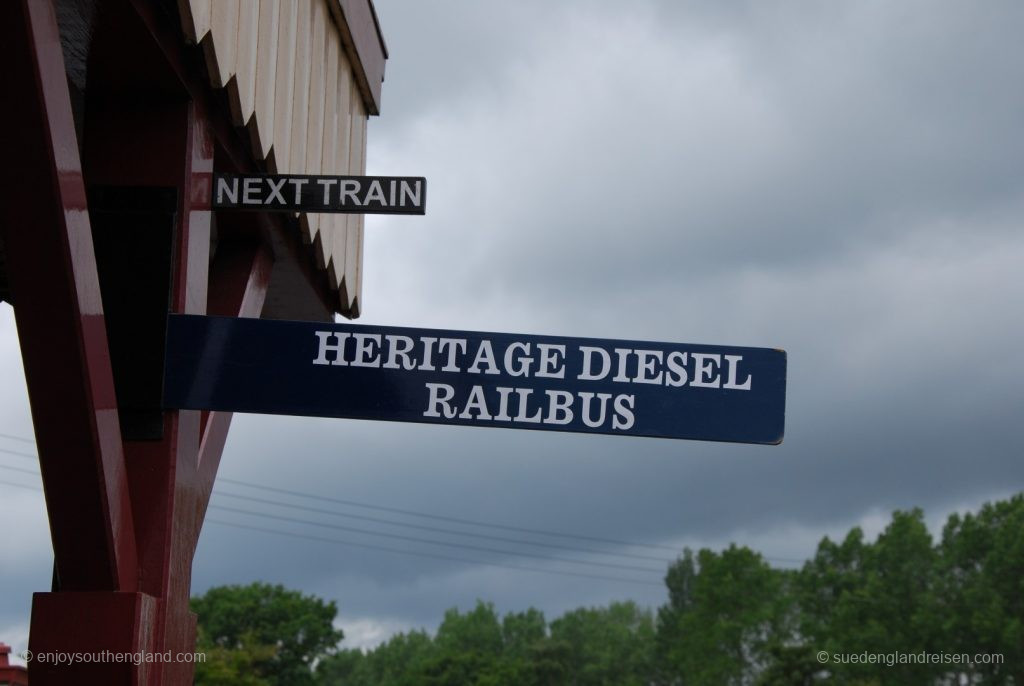 And perhaps another project will be a success in the next few years: the three-mile extension from Bodiam to Robertsbridge, where there will be a connection to the main line to and from London. However, this project is operated by another organisation, the Rother Valley Railway. Let’s stay excited! Speaking of organisation: K&ESR is always looking for volunteers and offers training as a “Crossing Keeper” (i.e. the barrier keeper, possible from the age of 16) up to the train driver or signal box. Volunteers are actively approached by means of high-quality and appealing brochures. It is striking, however, that the age of at least the staff active during the week is naturally more in the seniors’ area. For this, one is with enormous commitment to the matter and likes to transfer this enthusiasm to the interested visitors during a nice chat. Detailed information about this Railway can be found here.
(visited in June 2011) 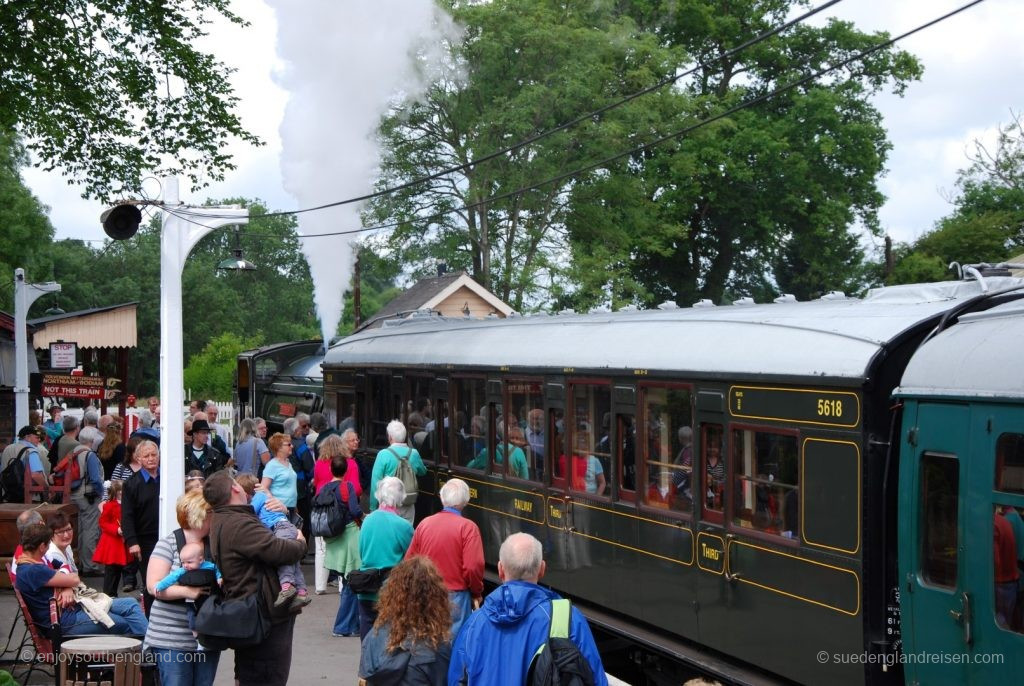 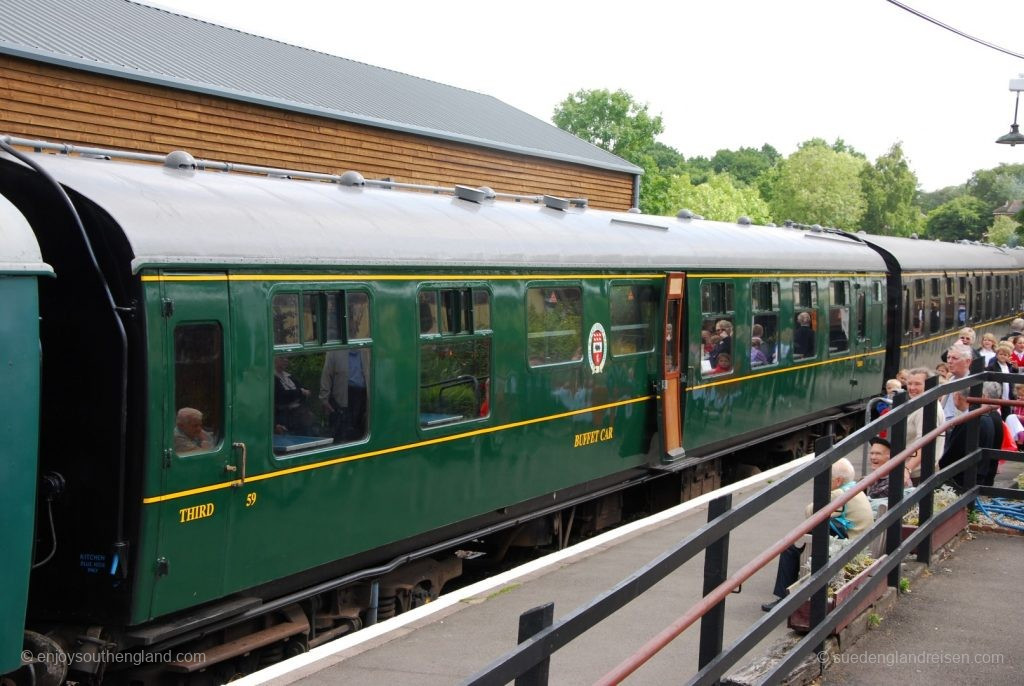 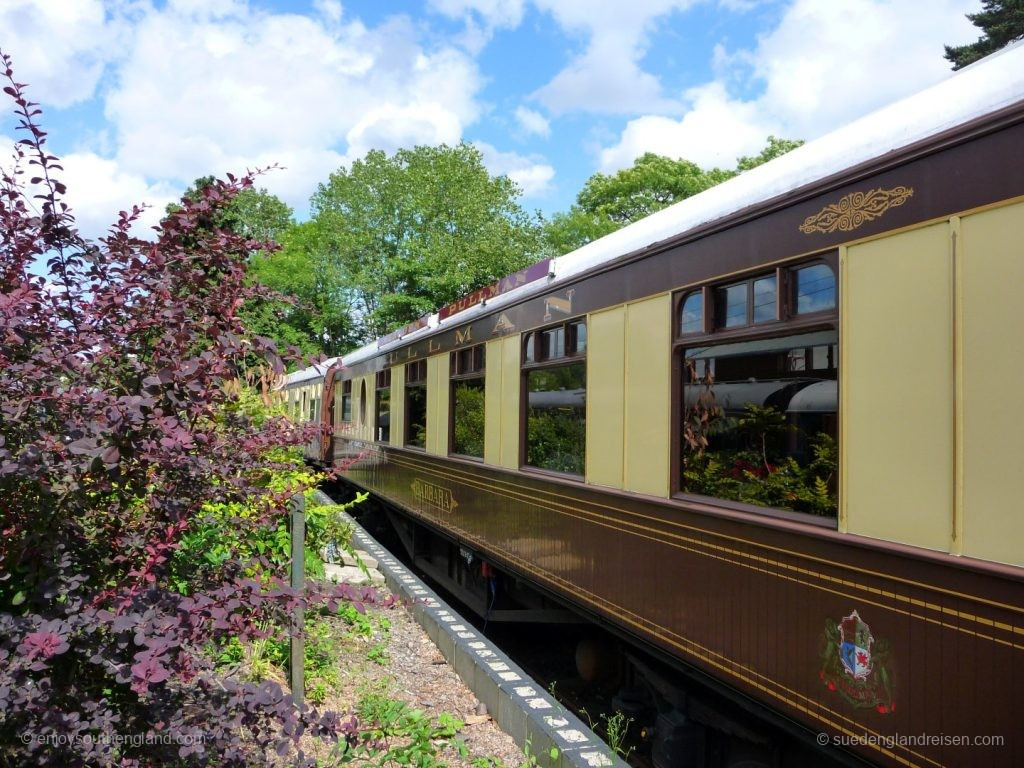 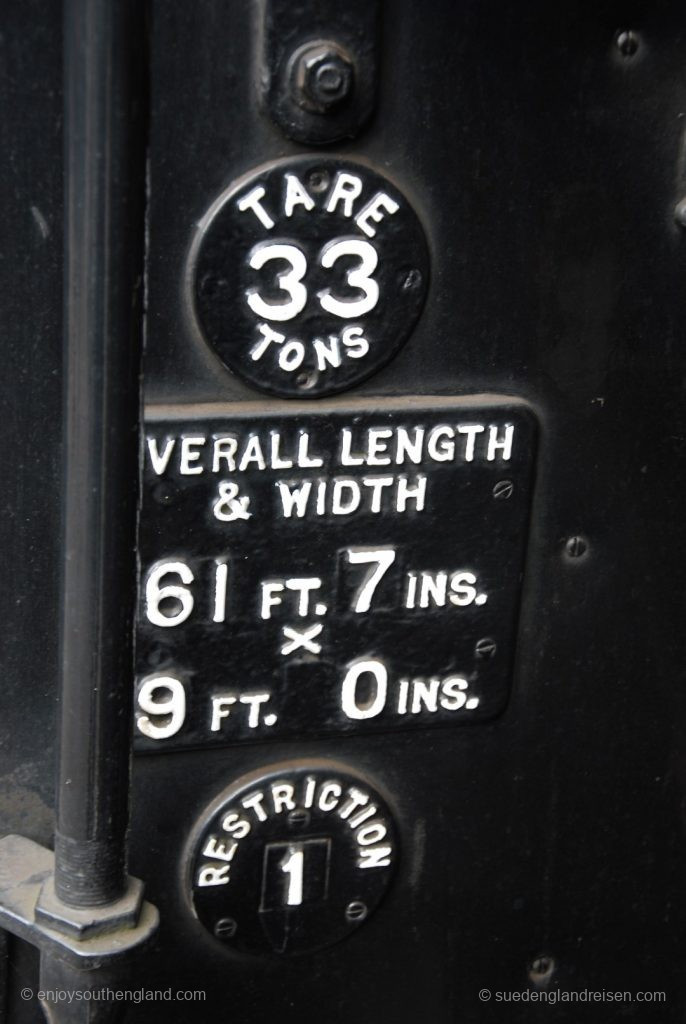