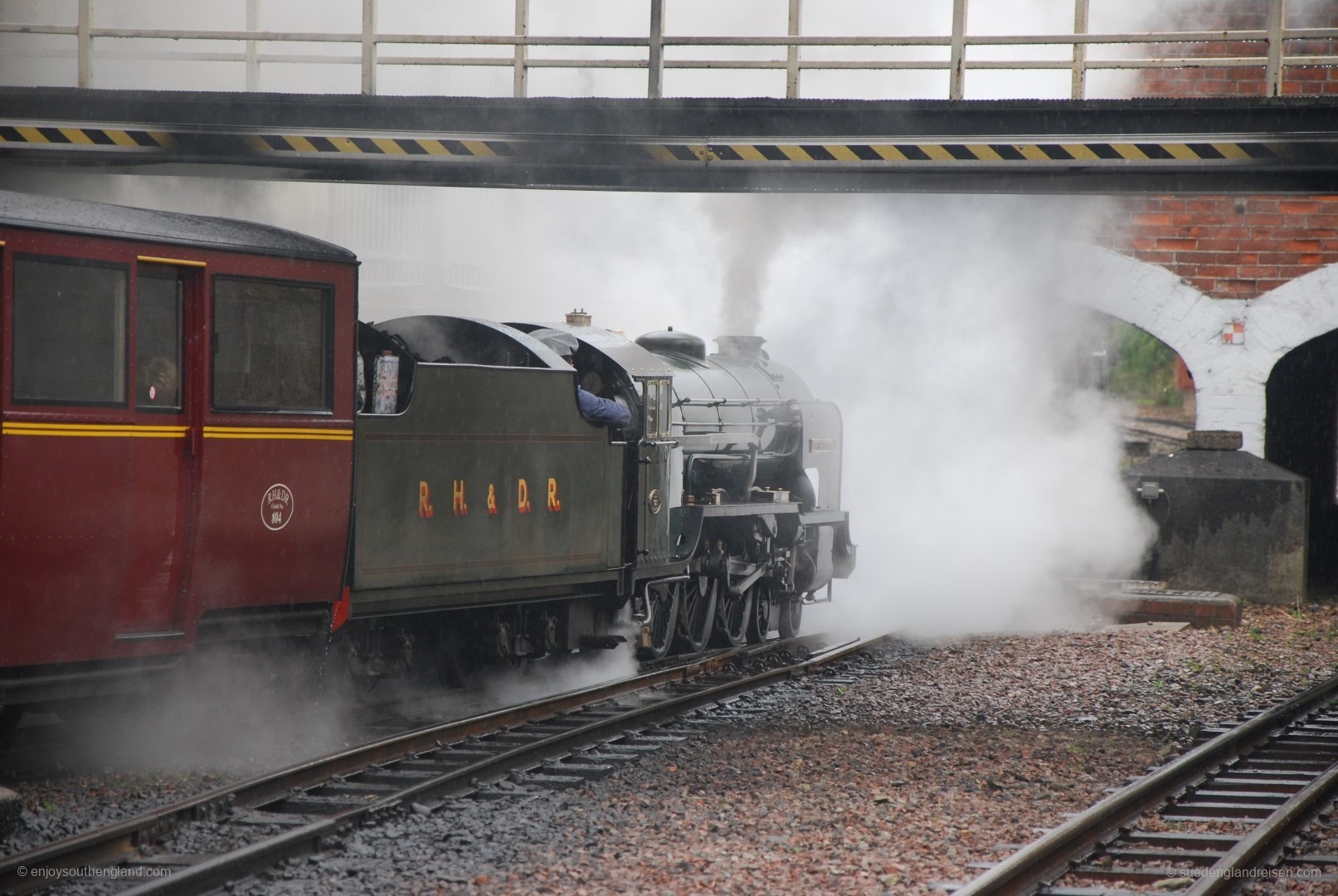 The Romney, Hythe & Dymchurch Railway at the exit from New Romney

Here in the south-east of England, the charming eccentricity of the British can be wonderfully traced. In the 1920s, for example, it became fashionable to recreate the most modern and impressive locomotives in the size 1:3 and to have them run on specially built lines on correspondingly narrow tracks according to the regular timetable. The largest such line is the Romney, Hythe & Dymchurch Railway, which is located near the coast of the English Channel near Dover and Folkestone. It was opened in 1927 and still covers a distance of 22.5 kilometres (13.5 miles) between its two terminus, Hythe and the Dungeness Lighthouse. The gauge is 381 millimeters (15 inches), just like the Vienna Liliputbahn. Once known as the “world’s smallest public railway”, it now operates daily from Easter to the end of September, and on weekends in March and October with up to 14 pairs of trains per day. 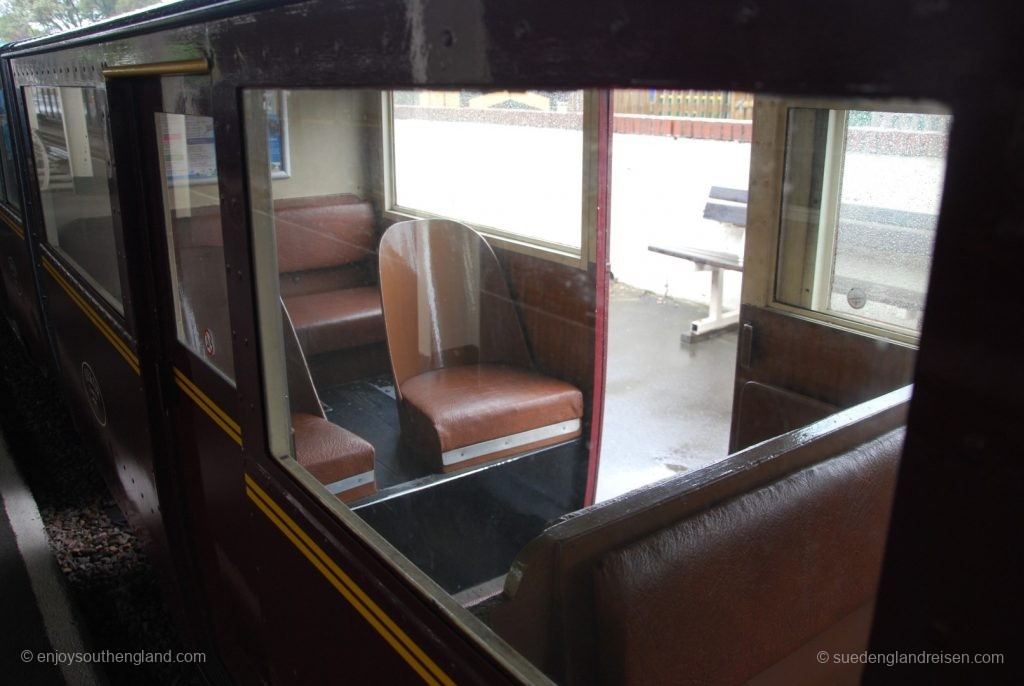 There are currently eleven steam locomotives and two diesel locomotives in service, which carry long passenger trains with space for up to 200 passengers. The steam locomotives have as a model British (fast train locomotive2’C1′ “Flying Scotsman” with 5 examples and 2 ‘D1′ with 2 units), American (Pacificlocomotives 2’C1′ with 2 units) and German (fast train locomotive 2’C1’ with one copy as well as a small B-coupler) full-class vehicles. The diesel locomotives represent more recent models from great Britain. The passenger cars have two seats next to each other, mainly benches and partly also armchairs. Fixed trains are assembled, each painted in different colours. 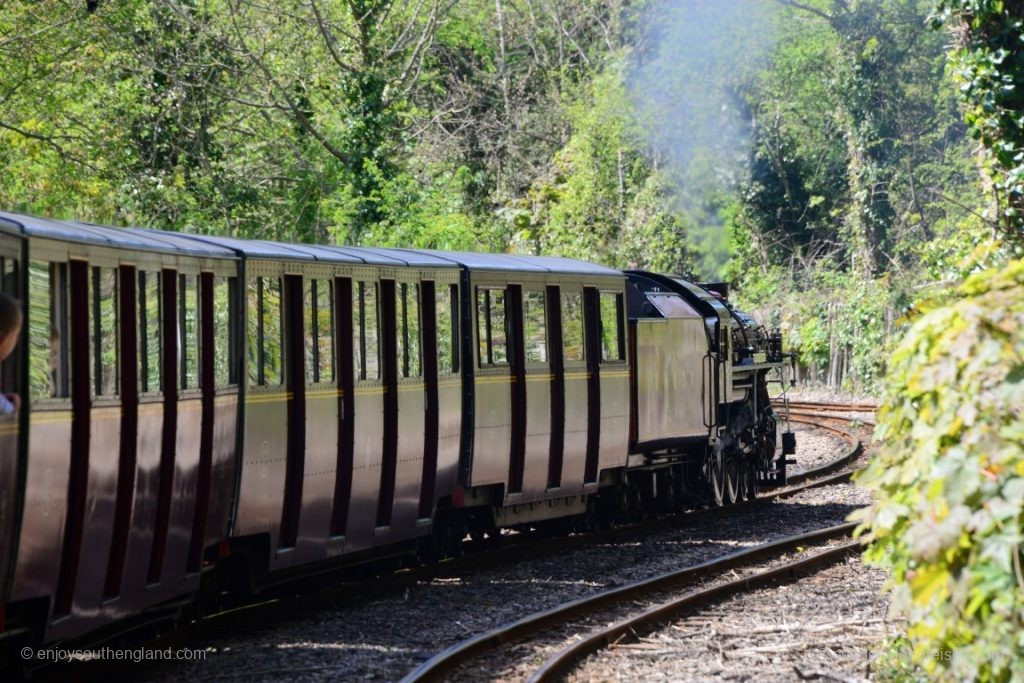 On the road to Hythe with the Romney, Hythe & Dymchurch Railway

the line will run from the old port city of Hythe, a member of the nominally still existing conduit of the “Cinque Ports” (Five Ports) from the 11th century. Starting from this terminal station with 3 platform tracks and an overtaking track for the conversion of the locomotives, Dymchurch, a small coastal town with a beach, is reached after 20 minutes by car. After another 15 minutes, the center of the “Romney Marsh” marching land, the eponymous town of New Romney, is reached via the stops “St. Mary’s Bay” and “Romney Warren Halt”. Here is the centre of the RH&DR with seven-track covered station, turntable, coaling plant and heating house as well as repair shop. All locomotives are redrawn here.

The route continues south via the “Romney Sands” (a beachholiday holiday village) to the Terminus “Dungeness” directly at the historic lighthouse, which is reached 27 minutes after the departure from “New Romney”. If the northern section between Hyth and New Romney is still a two-track main line, the southern section between New Romney and Dungeness is completely single-track. Crossing the north bounds and southbound trains is always New Romney, where a platform-like change to the other train is possible. 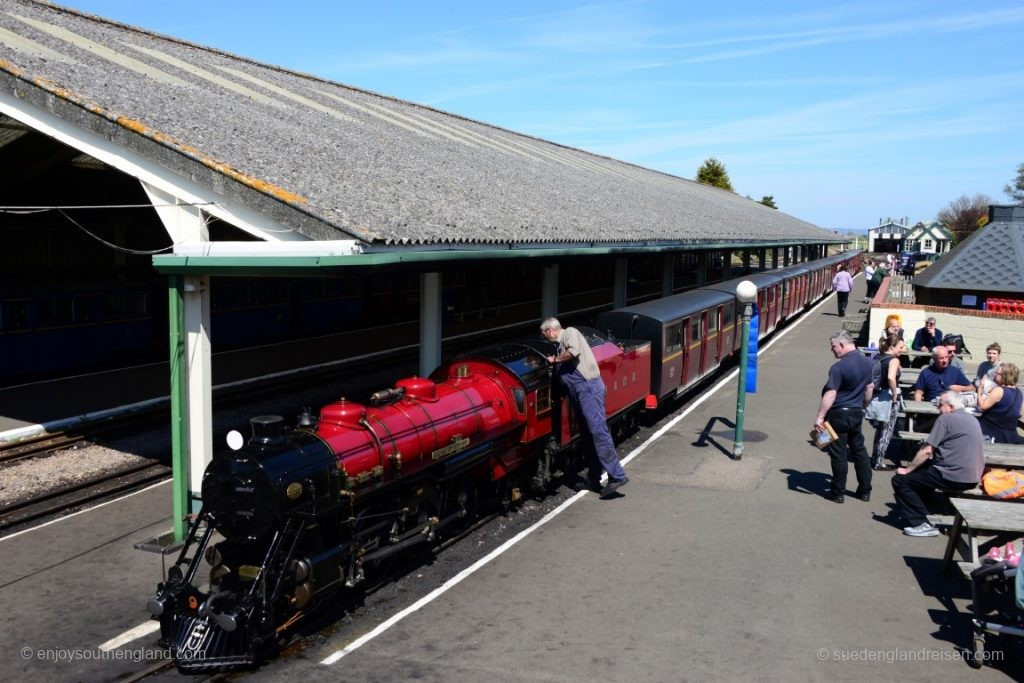 The Romney, Hythe & Dymchurch Railway is 1:3 scale – but a public railway!

Both parts of the line have very different character: the northern part runs at least partly through agriculturally used area “in the green”. The southern part, on the other hand, cannot deny a certain tristesse: Due to the now continuous development of the direct coastal strip, the route runs almost past the backyards through a flat, little used and rather boring land. The closer you get to Dungeness, the easier and more unkempt the building. Despite further (gravel) beaches and self-promotion as a holiday area, a longer stay here is undoubtedly hardly appealing. Visible from afar, the local nuclear power plant rises out of nowhere in the marshland that has only been formed from sediment deposits in the last 200 years, which is also close to the terminus. Apart from a visit to the historic lighthouse and the nearby beach, the visitor has little more than the Dungeness station café to bridge the time until the return journey. Nevertheless, a trip is highly recommended, as is a visit to the station of “New Romney”, which offers an incredible flair of real steam operation and at the same time incredulous amazement at the size of the locomotives and wagons at its regular train crossings. 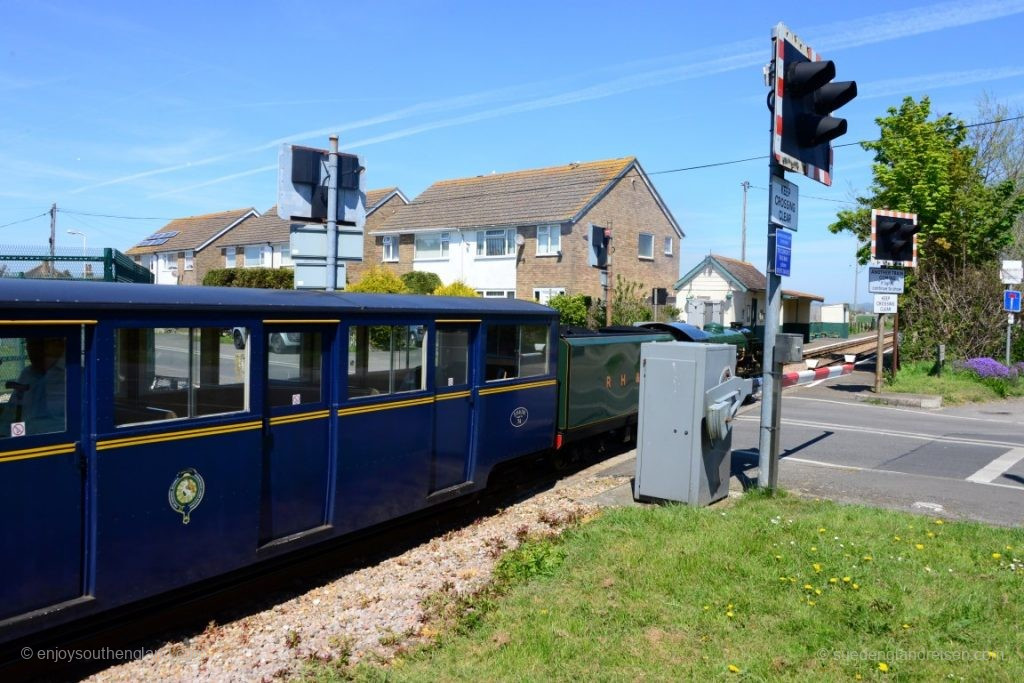 Trains on a scale of 1:3 regularly cross the road

If the visitor stands next to the train, he can hardly believe that there is enough space in it, given a height of only about one meter – in fact, the feeling of space for a “miniature train” in size 1:3 is not bad. The foot space of the vis-a-vis compartments, each with its own access via sliding doors, is also large enough. As a rule, an open carriage is also carried per train. In view of the often rainy English weather, the closed carriages are also urgently needed in the summer months. In any case, on a windy and rainy day, it is hard to believe that these small, albeit long, trains are actually able to safely cope with this not inconsiderable route. 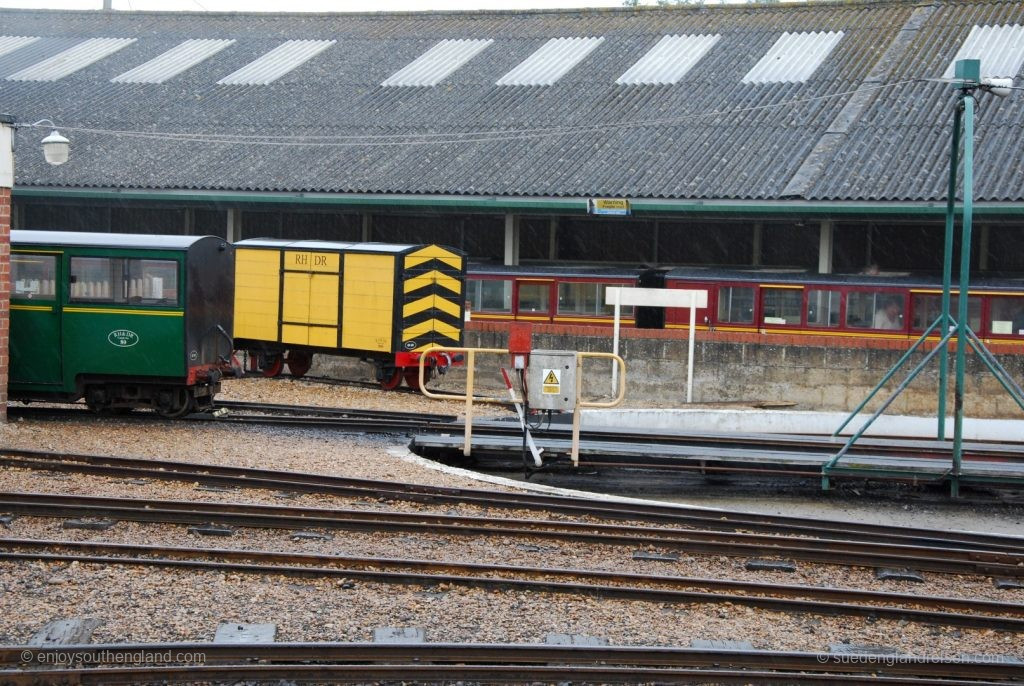 Just the entry or exit of a train from “New Romney” south with the passage through the tiny-looking passages of the road bridge (O-tone of a visitor: “There should a train pass with passengers?”) is worth the trip! 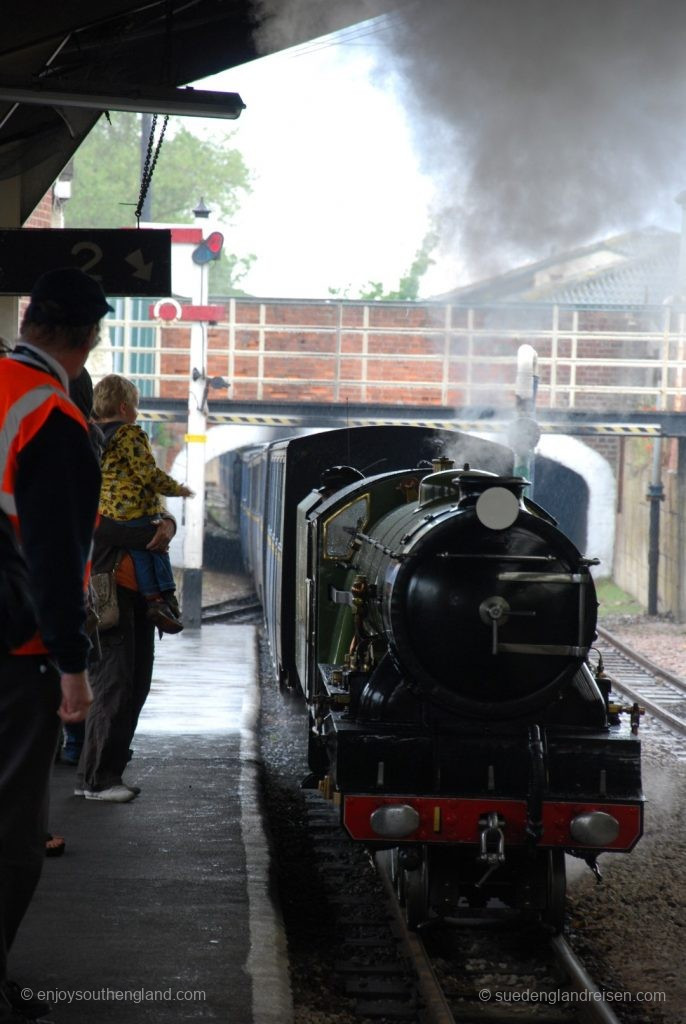 And if the heater fills coal in the tender from an iron bucket and the driver places two large cups of tea directly under the controls, both staff members hardly sit side by side on the narrow bench, with the roof of the train barely reaching chest height – then this has a very unmistakable atmosphere! 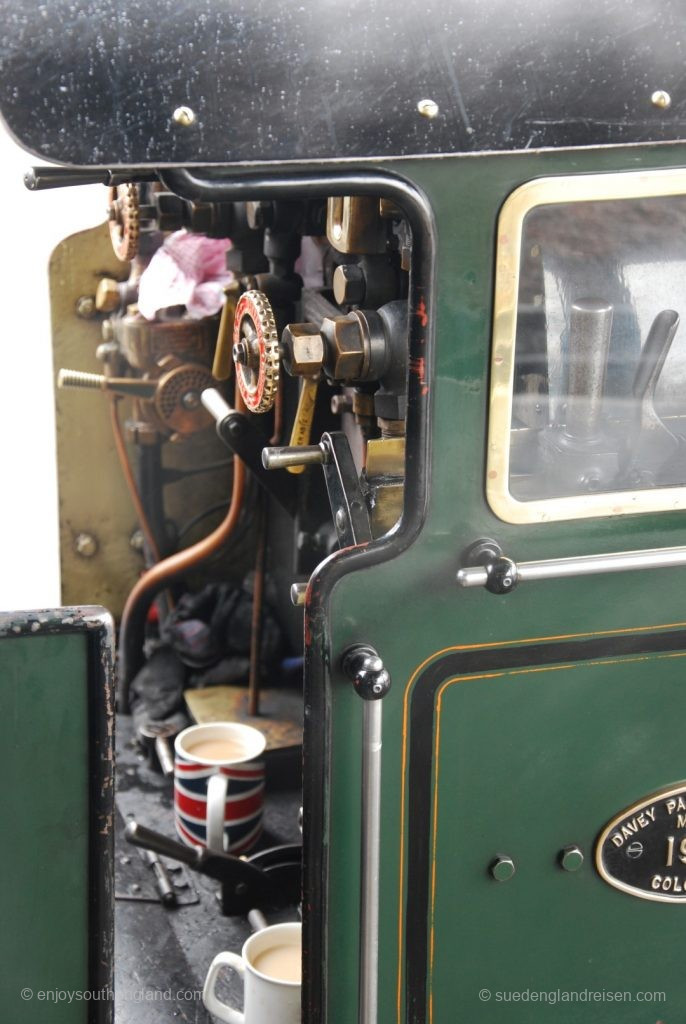 The locomotive is already smoking heavily and, after a loudspeaker announcement, as at all other major stations, the form signal is set up and the departure order is issued. Under mighty steam output, the 11:30 o’clock train to Dungeness sets in motion and sets off on its almost half-hour drive through the pouring rain over the windswept marshland to the south. 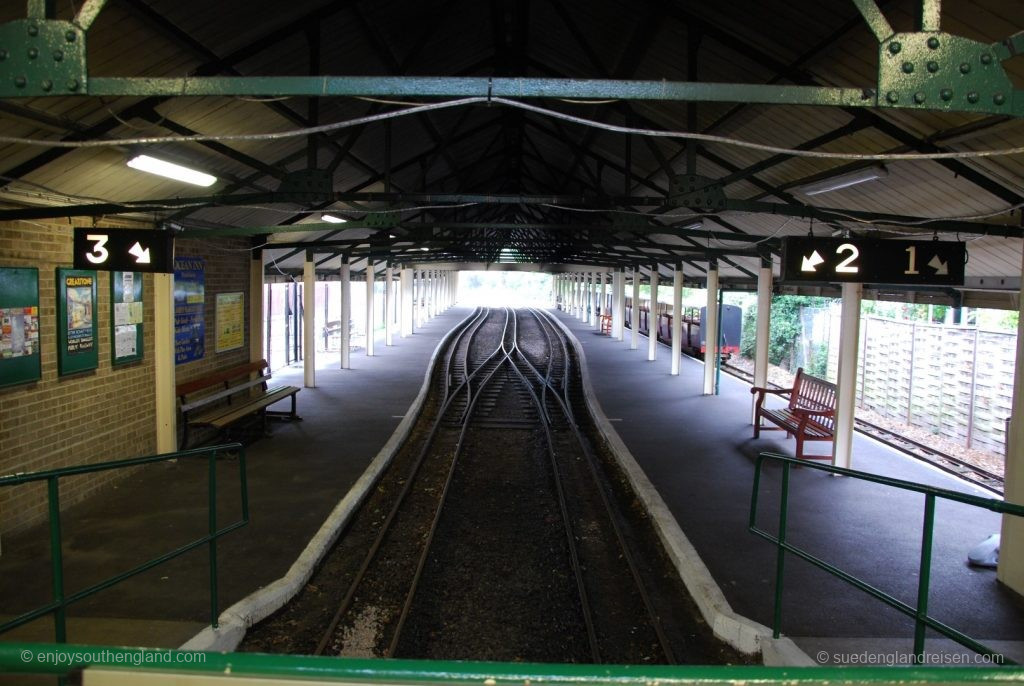 And if you want to experience the operation not only as a passenger, but want to stand by the controllers yourself, pardon: you can do this yourself in special courses. From simple rides as a basic course to self-driving as a full-day course, everything is offered – but the latter is only offered during the non-operational period from October to March. Incidentally, most of the operation is maintained with voluntary unpaid employees working in all areas. What is striking is their active extraction by means of flyers and the invitation to discuss together the possibilities of cooperation and the ideas of the potential candidate over a cup of tea – who, with appropriate suitability and use of training courses, is open to all areas up to the train driver. For more information, including how to get there, visit the Romney, Hythe & Dymchurch Railway on its website.