The Island Line on the Isle of Wight:

Below England in the English Channel is the Isle of Wight, just 10 minutes by hovercraft ferry from Portsmouth. It is a major holiday destination for Britons and has a reputation as a sun island. With an area of 381 square kilometers (max. 35 km long and 20 km wide) it is quite manageable, but once had a normal gauge railway network of 89 km in length. Only 13.9 kilometres of the route from Ryde Pier Head to the coastal town of Shanklin are still in operation from this network, which was once quite extensive. This route has been marketed as the “Island Line” since the late 1990s and is still a fairly important link between the ferry from the mainland to the coastal towns with bathing beaches. For this purpose, it is well used in commuter traffic. In addition, the Isle of Wight Steam Railway reopened an 8.9 kilometre route. Today, this is in almost daily steam-powered operation, but as a museum railway worth seeing is not the subject of this contribution. 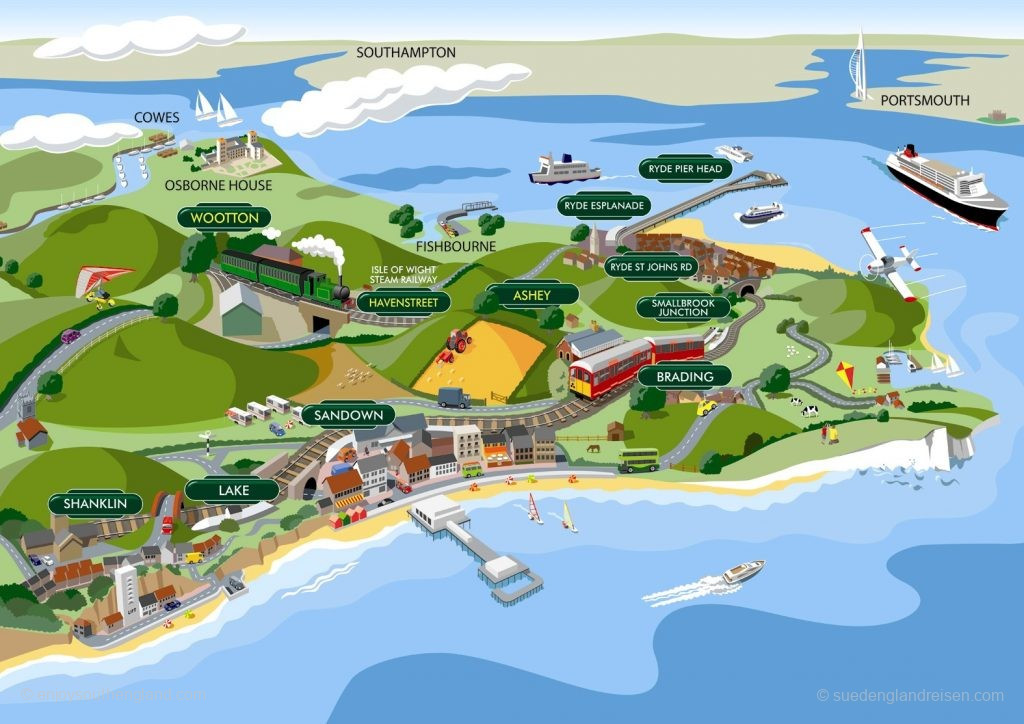 IOW Island Line – interior view of one of the subway cars – note the drawn description of the route with stops and sights placed above the windows.

IOW Island Line – An Island Line train in the characteristic classic colours of the London Underground in red with a yellow front at the entrance to Shanklin station. 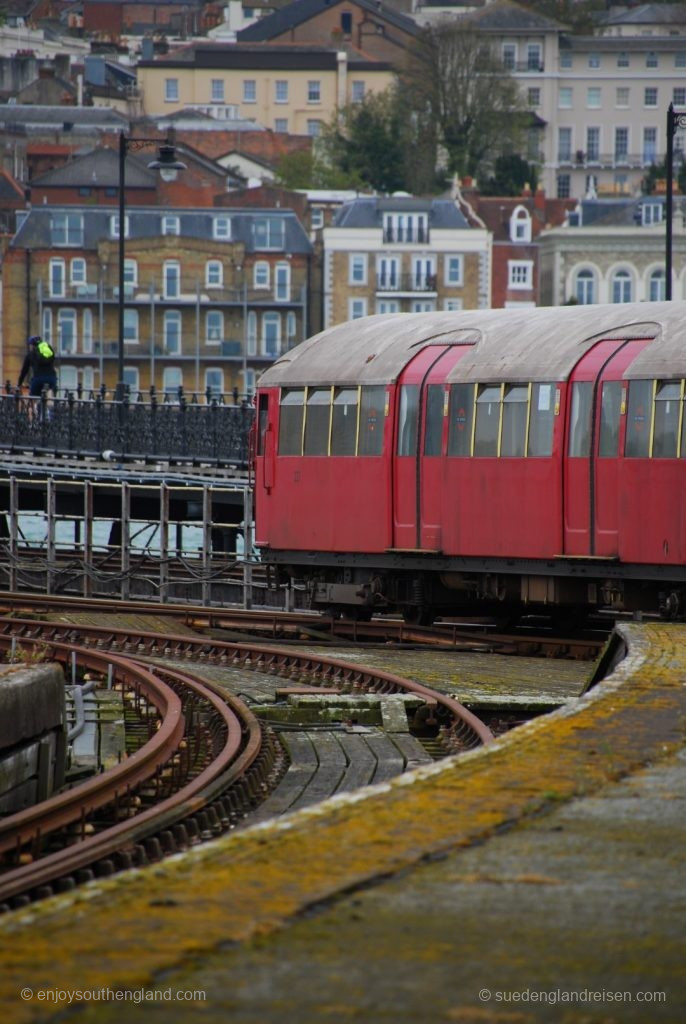 IOW Island Line – Exit from Ryde Pier Head Station. In the background the city and between train and background the pedestrian bridge on the pier. It is nice to see the exposed power rail on the left track, which is only used in exceptional cases.

We reach the Isle of Wight from London (Waterloo Station) via Portsmouth: 2:36 hours travel time to the port and direct change to the fast catamaran “Red Jet”, which takes us to the island in just 18 minutes The ferry docks at the extreme end of the almost 700 meter long pier of the city of Ryde. With only a few meters walk through the nicely prepared waiting hall, a direct change to the Island Line is possible. At the platform, it is worth a view of the tracks – the delicate substructure means that the sea is directly visible. Considering that the railways have their electrical equipment underrun, we know why, in particularly stormy weather with high swells, the railway operation on the pier has to be stopped. Fortunately, this is rarely the case. In the two-track pier station, the right track 1 is usually used at all times – and here is already our train. A typical old London Underground car with sliding doors pulled wide into the roof, even painted in the old brown-red London colour scheme with a yellow front. It is low – if you are more than 1.70 metres tall, you will involuntarily pull your head in when you board. Inside, softly padded seats in different arrangements await us longitudinally and transversely to the direction of travel. If you sit first, you have a rather generous impression of the room – standing it can be quite constricting. On the roof surface there is a beautifully painted representation of the route, which each station with its small highlights mentions. These pictorial representations are very typical of the British railways; for example.B from SouthWestTrains as the operator at the time, there is a really nice overall view of the island incl. the privately operated steam railway. The Wagons of the Island Line date back to 1938 and have been modified only slightly. They therefore do not have any modern safety components, which requires one conductor per car. Since the smallest unit is the double traction, three men are required. This is not always available and so in the low load time one of the 40-seat ervs is often blocked in order to get by with only one conductor. By the way, the inclined railway friend will prefer the rear carriage, because there the conductor operates the doors, makes announcements, etc. The time has come: the conductor closes the doors, which are slowly approaching, and finally gives the departure order to the driver – all via an open control panel on the driverless front of his car. After just under a minute and a half of driving time, the 644 meters distance is covered on the pier and reached “Ryde Esplanade”. This is the main station of the line with direct change to the island-wide mostly double-storey buses as well as the hovercraft to Portsmouth beach. The station itself is located in a rather narrow left-hand bend at a larger station building with ticket office and tourist information. 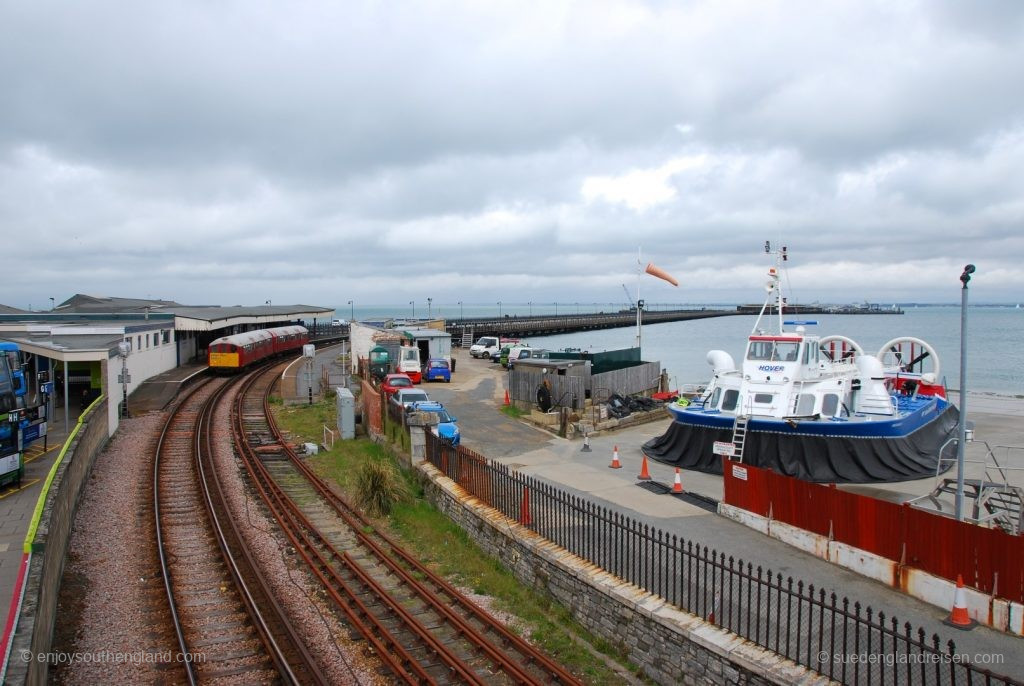 IOW Island Line – Ryde Esplanade – there are transfer options to the buses (left) and the hovercraft (right).

Directly from leaving the station, the line goes into the slope and is switched to the left track in the direction of travel. Shortly thereafter, the tunnel, consisting of two tubes, is reached and a part of the construction of Ryde (approx. 20,000 inhabitants) is crossed, almost in its old purpose as a subway. After 358 meters the daylight has us again and we drive mainly between commercial enterprises and some grassland through the eastern part of the city. After about 5 minutes drive we cross St. John Street and reach the train station of the same name in Ryde. This is also the operational centre of the line, because next to the two-track passenger station with the rather rusty iron bridge, there is the workshop and the open sidings of the unneeded sets. 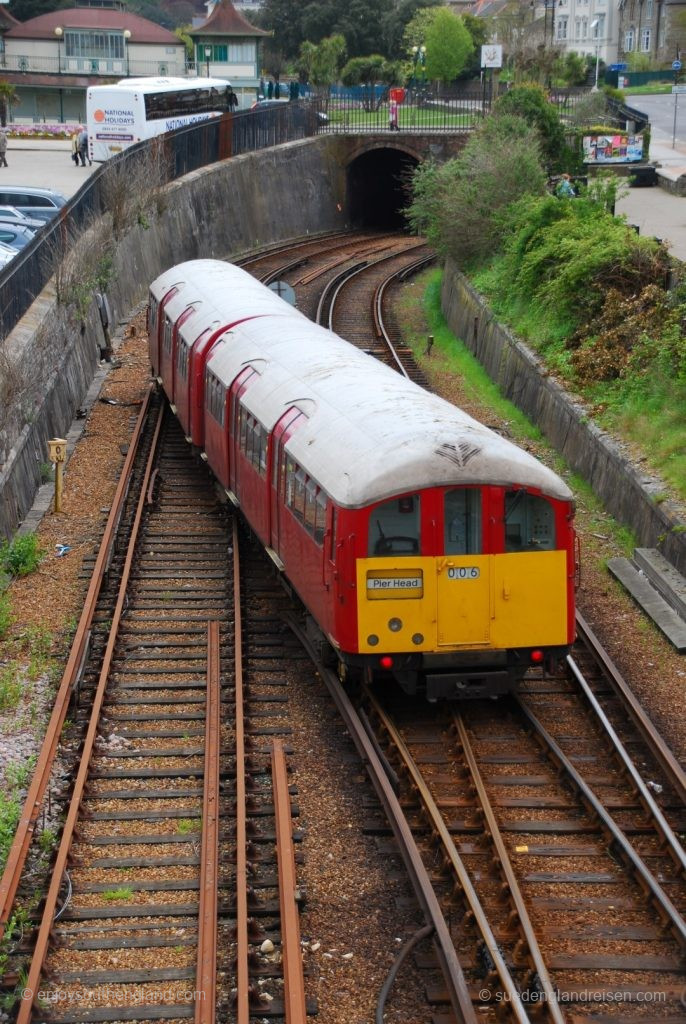 IOW Island Line – Change to the right track at the two-track area, just before the tunnel towards Ryde St. John Street.

After the descent you already think you are far out in the country – the ride immediately runs through the green! The line is double-tracked until shortly before the next station “Smallbrook Junktion” and here every second train crossing takes place. However, the station, which can be reached after only two minutes, is not always adhered to, but only in the case of traffic on the Isle of Wight Stream Railway, to which there is a direct pedestrian crossing. However, the tracks are not connected in terms of track! Where the steam train then turns east, our Island Line continues to move south. The journey runs through woods and meadows, where you can enjoy a driving experience of bygone times: the train slithers so hard at its permissible maximum speed of 45 miles per hour (approx. 72 km/h) that one always fears that it will jump off the rails immediately. In addition, the blows of the screwed rail connections – if the seats were not so extraordinarily softly padded, the low ceiling of the train would have to be full of dents. The conductors – for whom tickets are available at no extra charge, by the way – dance through the wagon at their outpatient ticket control. There is always an opportunity for a little chat, so much time must be! In addition, the howling of the age-defying engines – one may not believe that one is in a regular mode of transport of the year 2013. Five minutes later, “Brading” is reached. This station was double-tracked until the end of the 1980s and used to be a branch for the freight line to the port of Bembridge and St Helen. Some of the old extensive station facilities are still preserved, including the signal box. Unfortunately, only the house platform on track 1 is connected to track, which makes the continuous 30-minute interval impossible. The station itself conveys the wonderful morbid mood of this line like no other – just notice the intricate letters IWR (Isle of Wight Railway) in the iron platform roof racks. We continue and at first the distance, which is covered in 4 minutes, runs through free land, but then it becomes more urban – where Brading Station was still a bit outside the village, we now pass Through Sandown (5,000 inhabitants), already a seaside resort. The station is again double-tracked and here, too, every second train crossing takes place. The formerly quite extensive tracks with a junction of the line to Newport, which was abandoned in 1956, have now been almost completely dismantled. Single track it passes a park and already with partial view of the sea (left hand) continues on a dam through the now almost continuous building with a travel time of only three minutes. It was not until 1987 that the “Lake” station, consisting of a wooden platform, was built and since then it has been completely rebuilt. The stop directly in the green above the village seems almost idyllic – in view of the rather densely built agglomeration one should not be deceived by it. 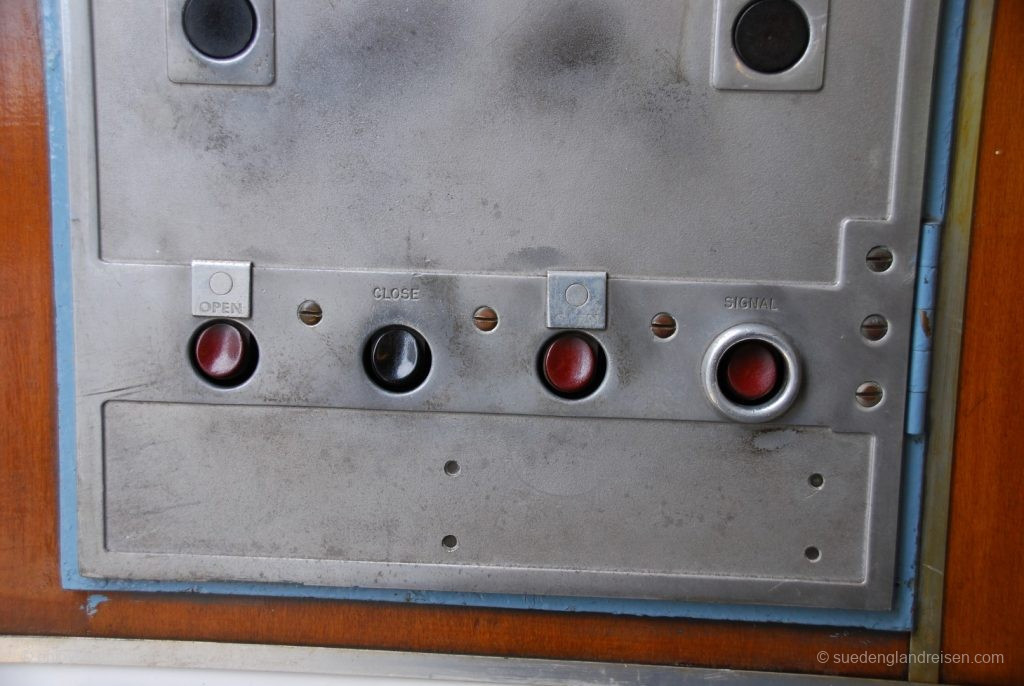 IOW Island Line – control panel for the doors – freely accessible on the driverless side of the car.

We have almost reached our destination: Another 3 minutes of the trip and directly to Lake the view from the left window is worthwhile: Now the cliffs and the sea can be seen before we cross the main road and reach our destination “Shanklin” (approx. 20,000 inhabitants) on a green strip. This popular seaside resort on the English Channel with its long sandy beaches has an adorable old town (“Shanklin Old Village”) and as a natural attraction the “Shanklin Chine”, a kind of gorge through the chalk cliffs towards the sea. Here our journey ends, abruptly bounded by a bruise directly at the abutment of a former bridge. The single-track station even has a half-day ticket office (despite ticket sales on the train) and before that taxis wait for the arriving passengers. 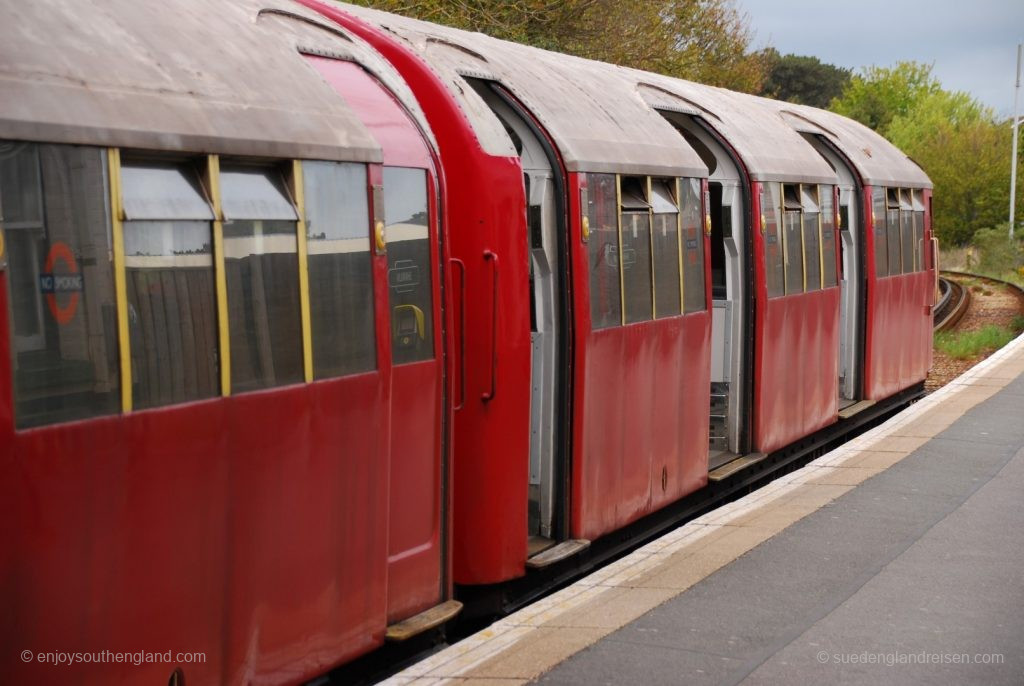 IOW Island Line – Please move your head in when boarding! 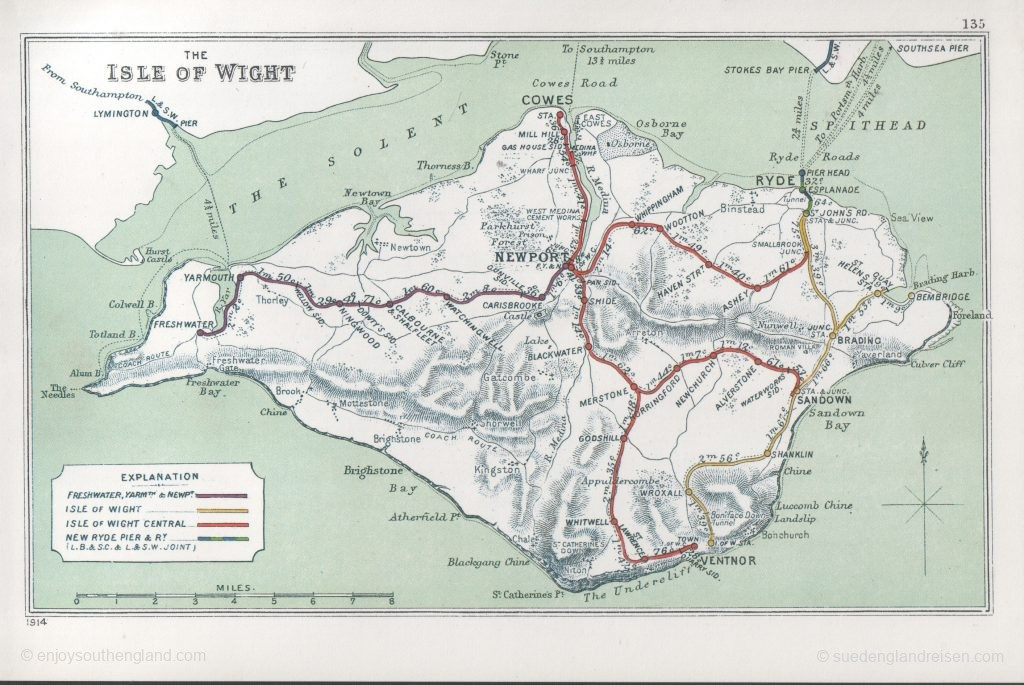 Before we leave the platform and make our way through the beautiful old recording building on the approximately ten-minute way into the inner and old town or to the beach, we take a look into the driver’s cab of our subway. It is clearly the technology of 1938: a cam switch operated with the right hand and the compressed air brake operated with the left hand. The operation is done more in standing than in sitting, with a kind of padded standing aid for the driver installed. A last look back at the train and the hope remains to be able to continue on this lovable route into the summer resort.